Raised amidst the rich musical traditions of southern Appalachia, cellist Juliana Soltis performs the world over – from New York, to Osaka, to Venice – as both soloist and chamber musician. Hailed as “a clear virtuoso” (Classical Music, UK) and praised for her “exquisite” and “heart- rending” interpretations (Early Music America), Juliana specializes in the historical performance of the Baroque and Classical cellos, violoncello piccolo, and viola da gamba. 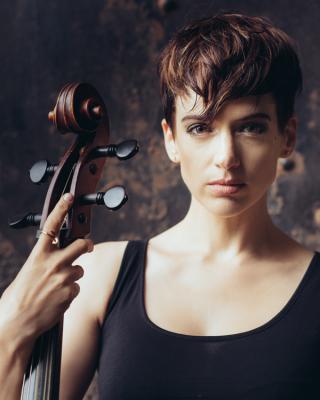 Ms. Soltis has been a featured performer both at the Boston Early Music Festival and on numerous concert series, including Gotham Early Music Scene’s Midtown Concerts (New York, NY), the Candlelight Concert Series at Bruton Parish Church in historic Williamsburg, VA, and the Millennium Stage Series at the John F. Kennedy Center for the Performing Arts in Washington, DC. In 2016, she headlined the BRQ Vantaa Festival (Finland) Fringe Series for emerging artists, and her 2015 Japanese tour of the Bach Suites for Unaccompanied Cello was met with both popular and critical acclaim: “Never did one think the heart could be so moved by a cello alone” (Yomiuri Shinbun).

Consistently lauded for her uniquely “thought-provoking” approach to historical music (The Oberlin Review), in 2017 Juliana released her debut album on the Acis Productions label – Entrez, Le Diable!: The Virtuoso Cello at the Concert Spirituel. A chronicle of the meteoric (and controversial) rise of the cello as a solo instrument in eighteenth-century France, the album garnered international attention with rave reviews – “[a] fierce display of impassioned rhetoric” (Gramophone) – and was hailed as a debut of note, with Colin Clarke (Classical Music, UK) proclaiming it “beyond criticism” and “a stunning release.” In August of 2019, she will release her eagerly-anticipated follow-up album, Going Off-Script: The Ornamented Suites for Cello, a tour-de-force exploration of the lost tradition of ornamentation in Johann Sebastian Bach’s beloved solo cello works.

A passionate performer-scholar devoted to telling the forgotten stories of classical music, Juliana works, in partnership with her project-based artist collective Marginalis, to shed new light on those composers, performers, works, and moments that have been marginalized by the accepted tradition of music performance. Equally devoted to the idea of making great music accessible to all, the musicians of Marginalis will launch their marquee concert series, Notes from the Margins, in the 2020-2021 season. Free to the public and available exclusively online and through social media platforms, the series seeks to revolutionize the way audiences experience and interact with historical music.

Juliana holds degrees from the New England Conservatory, Ball State University, The Longy School of Music, and The Oberlin Conservatory; her primary studies having been conducted under the tutelage of Yeesun Kim, Richard Aaron, Phoebe Carrai, and Catharina Meints Caldwell.

An active concert artist who maintains a busy touring schedule both at home and abroad, Juliana has been on a performing hiatus during the 2018-2019 season to focus on recording new music and relocating from Seattle, WA to the East Coast. She will return to the road in the 2019-2020 season with her Going Off-Script Tour, a slate of residencies and recitals focusing on the ornamented Suites for Cello by J.S. Bach in cities across the U.S., including Boston, New York, Chicago, San Francisco, and Los Angeles.

When she is not on tour, Juliana enjoys  distance running, early jazz, contemporary poetry, and binge-watching tv shows with her rescue greyhound, Rain.